A lot of the time when I get new Baofeng, or other Chinese manufacturers, it can be a whole lot of the same. The firmware, software, and even some of the components are almost identical. In fact, I have had some radios where you could swap out a few stickers and one seems to magically transform into another. Not so with the Baofeng UV-13.

Yes, a lot of the plastic and general ideas are the same on the Baofeng UV-13 as other Baofeng radios, and yes, the bulk of the menu items in the firmware are the same. But there are some pretty interesting differences too.

The Baofeng UV-13R and UV-13 Pro seem like identical radios. To be completely honest I am not sure what the differences really are. It appears that the R has more power than the Pro, but that is not true from all sources. Checking eBay for the UV-13R currently shows all results as 10W radios. Doing the same eBay search for the UV-13 Pro shows both 10W and 5W radios.

The rest of the specifications on the two Baofeng UV-13 variants seem to be the same and the manuals for the two seem to be the same as well. Both are listed as having an 8800mAh battery which is not just false, but insanely false. Did I test them? Nope. Fortunately, I didn’t have to as the manufacturer did it for me. The battery on these are marked as Boafeng BL-13UV batteries and the Baofeng Amazon store shows that battery model as a 1500mAh battery. 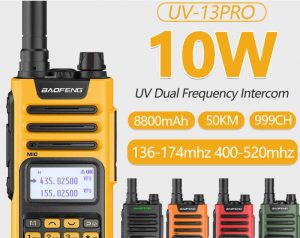 That is not the only patently false claim on the Baofeng UV-13 series, the power output is just as false. The model I bought was listed as 10W and it peaked out just a tad over 3W on its best test at 145.520Mhz. It drops down to 2W on 446.000. (There is a link below if you want to see how I test these)

Of course, they also claim a range of 50KM which is just absurd for this Baofeng UV-13 series. Could you get 50KM out of it? Probably, standing on Mt Everest transmitting to another mount top on a perfectly clear day, it could happen. Is anyone who actually buys one of these to use going to see that kind of range? Nope.

One other thing to watch out for with the Baofeng UV-13 radios, or any Baofeng radio really, is that you may see the really cool-looking yellow version. I bought three yellow Baofeng radios, and none of them were actually yellow. Take a look at the buttons in this review that say “Check Price & Reviews”, that is about the color yellow the radios I received were, and they all looked bright yellow in the advertisements. You may like that color, but I did not.

Getting back to what makes the Baofeng UV-13 series radios different from other Baofengs, the first thing was the way you switch from Channel to Frequency mode. While not the only Baofeng to do this, it is very uncommon, you press and hold the MENU button for a few seconds to make the switch. While I would prefer a dedicated button, at least it is not as bad as the Baofeng BF-A58 where you had to press and hold the MENU button while turning on the radio to perform this function.

Pressing and releasing the EXIT button on the Baofeng UV-13 switches banks from the upper to lower or vice versa. Be sure you do not hold it down as this will display the current battery voltage.

Note that the keyboards seem to differ from vendor to vendor, at least the pictures of the keyboard on the Baofeng UV-13 series radios do. Some, like the ones I have, have a button labeled MENU in the upper left and then an EXIT button in the upper right. Images online, including the ad for the UV-13 Pro I purchased, show what looks like a menu icon on the key in the upper left and icons in the upper right that looks like a return arrow and a storm cloud. The rest of the keys look like the ads and vary in coloring on the various colored models.

Another feature they advertise heavily on all the newer radios, not just the Baofeng UV-13 series, is that they are USB-C charging. Many of them do not include a drop-in charger either. There are some important points here including the fact that the radio is not USB-C charging capable, but the battery is.

What does that mean, exactly? Well, the battery has a USB-C charging port on the bottom, on the bottom of the battery, not the radio. So all they did with the Baofeng UV-13 series is use a USB-C charging battery and call the whole thing, USB-C charging. Misleading, but yeah, still functional. You need to keep in mind though that since the USB-C port is on the battery, you can not use it to program the radio, it still uses the standard Baofeng programming cable. This is the same cable that has been used on most Baofeng radios since the UV-5R.

Speaking of the battery on the Baofeng UV-13 series, they are using long batteries that have the belt clip mounted to them. This means they are using the flimsy belt clip with sharper edges. While functional, this is not my favorite clip from them as it tends to put the sharp edges of the clip in exactly the worst place on my hand for extended use.

And while we are talking about use issues, the Baofeng UV-13 series radios have the button layout on the left side where the PTT button is between two smaller buttons. This drives me crazy as my natural grip puts my fingers on the top button instead of the PTT button. I can not tell you how many times I replied to someone on the air and released what I thought was the PTT button only to have the hiss of the FM radio in my ear. (the top side button turns on and off the FM radio)

You have probably figured out by now I am not a fan of the Baofeng UV-13 series radios, and you are right. But it really is not all that bad. It appears to be built fairly well and has a reasonable heft to it. The buttons and knobs work well. I didn’t think I would like the green color but it has grown on me and looks pretty nice (I got green because I had never had a green radio before so was trying to expand my horizons, lol).

The transmission power and clarity of the Baofeng UV-13 radios, though fairly poor, are no worse than most other Baofeng radios. You can listen and see for yourself in the audio file and charts below.

The speaker does a pretty good job on the Baofeng UV-13, better than many others. This is probably due to its slightly larger size allowing for a nicer speaker.

Looking at the LCD screen on the radio you can see a shadow when the light is above you and the screen is at least at a slight angle to you. This makes it hard to read in those conditions. Otherwise, it is not bad and I do like the backlight as it lights up the screen brightly, and evenly. Backlighting has been an issue on some Baofeng radios but in the Baofeng UV-13, they did a good job.

One other huge departure from most other Baofeng radios is that the Baofeng UV-13 uses proprietary programming software. No, you can not use CHIRP to program this radio. The software looks and feels like the programming software for the Baofeng DM-V1, but without the DMR capabilities. While this software is easy to use and pretty straightforward, I would still prefer the ability to use CHIRP and one wonders why they would spend the time and effort to make their own programming software when so many of their other radios work so well with CHIRP.

My guess here is that the Baofeng UV-13 is another copy of a Baofeng radio with some different plastic bits and a new model number just to use that Baofeng name to try and make some sales. This would explain why the radio is not listed on the Baofeng website or in any of the official literature that I can find.

I absolutely am not a fan of the Baofeng UV-13 series radios, which should be obvious by now. It is built fairly well and does its job fairly well, but beyond that, not much positive can be said.

If you need a radio that can be charged directly via USB-C, then the Baofeng UV-13 might be a workable solution. I can not think of another reason to buy one of these and even that is a stretch.

I hope you enjoyed my review of the Baofeng UV-13R and Pro!